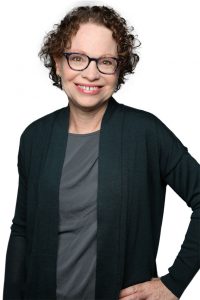 Judith is a Licensed Clinical Social Worker (LCSW) with over 30 years of experience as a therapist, speaker and author. She received her Master’s degree in Social Work from the University of Michigan and completed a post-graduate fellowship and Michael Reese Hospital in Chicago with a focus on eating disorders. Judith specializes in Binge Eating Disorder, chronic dieting, and weight concerns. She uses the Health At Every Size® framework to promote wellness beyond weight and address social justice issues that affect people of all sizes.

Judith is the author of three books related to eating and weight concerns: The Diet Survivors Handbook, Beyond a Shadow of a Diet, and Amanda’s Big Dream. She is also co-author of The Body Positivity Card Deck and The Making Peace with Food Card Deck.

Judith is a popular presenter at local, national and international conferences. She offers educational programs and workshops on the topics of diet culture, binge eating, emotional eating, body image, and weight stigma.

Judith lives in the Chicago area. She loves to walk, read, meditate and spend time with family and friends.

I wanted to share this story about myself that I wrote as an article for a magazine.
An edited version appeared in North Shore Magazine in January, 2006 with the title “Diet Not, Want Not.”
Hope you enjoy it!

A Leap of Faith

“You’re so thin,” my boyfriend said to me when I was a senior in high school. Strange as it may sound, his comment triggered my first diet. Many of my friends were already dieting, and besides, if thin was good, wasn’t thinner better?

I remember sitting in my bedroom as the smell of meatloaf drifted to my room at dinnertime. I was starving, but determined to endure my physical discomfort in order to avoid “extra” calories. I remember telling a college professor over lunch that I would never eat a cookie again without feeling guilty. I also remember the late night binges on cheesecake and whatever else I could scrounge up at my dorm. As a result of my dieting, my body size increased and was now, according to a male friend who felt free to comment, “Rubenesque.” Fortunately, I had an experience following graduate school that would forever change my relationship with food and my body.

My husband and I moved to Boston for a summer before we settled down to our “real lives” in Chicago. With no scale and no mirror in our studio apartment, I resolved to take the summer off from dieting and my obsession with weight. I took a job waitressing at a well known seafood restaurant where food was plentiful. That summer I also discovered Steve’s Ice Cream with Oreo Cookie mix in’s and bought several pints at a time. When I returned to Chicago that fall, to my surprise, my weight had returned to its pre-dieting days. Something clicked. At that moment I understood that the very restrictions I had imposed on myself in order to lose weight actually increased my interest in food. I had lost track of the purpose of eating for nourishment and for pleasure. Instead, I had entered an obsessive relationship with food in which my sole focus was whether I ate what I “should” or “shouldn’t,” and whether I was being “good” or “bad.” As the result of these revelations I made myself a promise: to never again deprive myself of the foods I love. This meant that if I had the slightest thought that I “shouldn’t” eat something, I would eat it immediately just to prove that I could!

I now felt calm around all foods as my life went on. I worked for many years as a therapist in a mental health center and then pursued post-graduate education, which included training in eating disorders. I began to work with compulsive eaters, first as a group therapist in a liquid fasting program and then using a lifestyle and behavioral approach. Many things struck me during those years. I had never seen a group of people with so much willpower. What else can you call the ability to go without food for three months while drinking terrible tasting shakes? The people I worked with wanted, more than anything, to lose weight. They invested tremendous amounts of time, energy and money in this pursuit. They learned enough about nutrition to obtain a degree, and most exercised regularly. Yet despite the dramatic weight loss many experienced, sooner or later the pounds came back along with intense feelings of shame. “I’m out of control… have no willpower… just a fat pig…,” the lamenting went. It was as if nothing else about them – their warmth, intelligence, sense of humor – counted.

But, not everyone gained back the weight. Studies show that 2 – 5% of the population can control their weight, and I worked with these people as well. In order to maintain their weight loss, they monitored every morsel of food consumed – measuring, calculating and writing down their food intake. They engaged in an amount of physical activity that would fit the definition of compulsive exercise. They were terrified of being in a room full of food that they did not plan for. Yet they were considered successful by society’s standards because they kept off their weight. I reached a point where I decided that if this was what I was helping people to achieve – an obsessive relationship with food and weight that required tight control – I could no longer ethically continue this work.

In search of other methods, I came across the non-diet approach and realized that this understanding of the causes and treatment of overeating described my own experience with food ten years earlier. The basic idea is that the deprivation created by diets actually causes overeating, and that instead, we need to learn to eat when we are physically hungry, eat exactly what we are hungry for and stop when we are full. The cycle of deprivation and binge eating ends rapidly as all foods become “legal.” People using this approach begin to learn how they may be using food to manage uncomfortable feelings and how to compassionately work their way out of overeating. People stop putting life on hold until weight loss occurs and experience feelings of calmness and freedom around food that they never dreamed were possible.

I recently presented a seminar to a group of women at their workplace. “I feel like I’m standing at the edge of a cliff, and I’m terrified of falling off,” stated a participant as she considered the idea of trusting her body to tell her when, what and how much to eat. I understand her fear. Jumping off that cliff takes a real leap of faith. But to stay on top of the cliff means continuing the lifelong preoccupation with food and weight, which drains our energy and leaves us constantly feeling inadequate. I don’t know exactly where that woman will land because each of us follows our own unique path. I do know that in the end, however, it will be a land of peace, a land of comfort, a land of freedom.

So that’s my story with food and weight. We all have a story when it comes to food and how we see our bodies